My resolution to blog has been a long time coming.  Plus, I kicked off the new year with one very epic trip.
My friend, Drew, has moved to LA to seek his fame and fortune, or something. 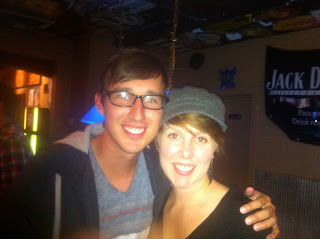 New Years Resolutions aren't my thing.  Usually, I keep doing the things I do and sometimes I exercise/write/travel more, and sometimes I do these things less.  There's a plethora of internet tirades about the ridiculousness of resolutions, so I'll hold off on that.

"Abroad" has many definitions; one of which is "freely moving about."  In the last seven years, I have moved four times.  Plenty of people move much more frequently than this, and of course there are people who only move around.  But four moves in seven years? That is four major life changes, and with every move has come a new way of life.

I will graduate in May, and from there, my future is not decided.  I've spent far too much time in the recent weeks fretting over whether I'll move somewhere abroad or if I'll hang in Lake Charles for another year or if I'll just move into my parents' non-existant basement and bide my time...

I'm in Lake Charles.  At the end of July, I took a week-long trip to Memphis.  It was a nice trip, but too hot.  It's too hot in Lake Charles too.  Really it's just miserable everywhere in the South right now.  I had the air-conditioner blasting during my drive back, and I think poor little Zeus still may have gotten over-heated.

Since my move to Lake Charles, going back home always brings up one major frustration: Travel Time.  Lake Charles may be a frustrating place in many ways, but I absolutely love the fact that I can get just about anywhere in less than 15 minutes, usually less than 10.  In the greater Memphis area, I usually have to allot at least 30 minutes to get most places, and I hate it.  Living in a small city has ruined any desire for a long car trip.  And there's something just awfully tiring about driving a car, especially in temperatures of 90 and higher.  Not to mention Memphis drivers are rude, aggressive, and careless; they drive huge SUVs and tailgate like all hell.  Basically, after a day of running around town, I have to go back to my parents' house and sit and be quiet to de-stress from the day.

This has a point: why don't Southern cities invest in decent public transport?  Yes Memphis has the MATA buses, which are as about as efficient as walking.  I realize that Memphis may be more spread out than the typical large city and probably doesn't have enough tax revenue to keep the city from sliding into anarchy, much less build something as exotic as an underground metro system.  But let's dream a little.
You may remember my love affair with the bus drivers of Angers.  The system just worked so well.  Rarely do commuters have to wait more than 10 minutes for a bus, and the bus drivers were just so damn nice.  (Unless you were riding without a ticket -- I am ashamed to say I was caught riding dirty exactly once.)
Why don't many American cities have the super-efficient, awesome, and mostly friendly bus system like their European counterparts?  Yeah, it is super annoying when people idealize Europe like it's some model of high civilization while America is dismissed as some kind of flailing barbarian of a nation.  And there are plenty of things America does very well, but, man, wouldn't it be nice to have decent public transport in places other than NY and DC?

This post is mostly a complaint; I apologize for the lack of reasonable analysis.

In other news, I have obsessively listening to the Freakonomics Podcast.  A while ago they had an interesting episode about Why Cities Rock.  Essentially, Harvard economist Ed Glaeser explains why (according to his data) city-living makes people "richer, smarter, greener, healthier, and happier."

I am subject to my whims.  I've decided to change the heading back to Abroad.

Something I love about Lake Charles (and SWLA) is the local public radio station, KRVS.  Radio Acadie has great programming, all the time.  (No, this post is not brought to you by their underwriters, or anything like that.)
At home, in Memphis, I started listening to MPB.  That's right, Mississippi Public Radio has better programming than the whole grand *cough* city of Memphis.  I'd love to listen to WKNO Memphis, but other than the weekday news and some of the weekend broadcasting, it primarily plays classical music.  Not that there's anything wrong with classical: I enjoy a bit of Mozart and Bach here and there, but unless it's Tchaikovsky's 1812 Overture (that's pt. 1, pt. 2 here), classical is not my preferred driving music.  And somehow even MPB's classical radio is better.

Anyway, KRVS has awesome music, almost all of the time.  And when it's not awesome music, it's sweet talk radio.  Radio Acadie plays plenty of Cajun and Zydeco, and there's even some programming in French.  They also broadcast tons of different folk, bluegrass, and blues music, David Dye's World Café, a baller Monday night opera show, and quite a bit of jazz.  On the talk side, there's the usual Morning Edition, All Things Considered, and Fresh Air, as well as This American Life, BBC (at a reasonable hour!), and all sorts of Louisiana Arts programs, including From the Poet's Bookshelf.
If you're in LA, here's a schedule.  If you're not, hopefully your state likes public radio more than west TN.

Louisiana may lag on all sorts of state ranking lists; however, the Sportsman's Paradise has managed to provide one of my favorite public services.

Here's a song (kind of) about the radio.  Sure, Courtney Love might be a horrible human being, but love her or hate her, this song is pretty awesome.

Al Abroad has been on a bit of a hiatus.  This is due to two things:
1. Grad School is hard.   Really, it is.  This semester kicked my ass.  12 hours of classes + teaching + tutoring hours + eating/sleeping/taking care of the dog.... There just aren't enough hours in the day.
2. My perspective is off.  The easy thing about blogging from France is that everything was so novel.  There was always some quirky or annoying or bat-shit-crazy thing to write about. Plus, I was always on the go, meeting new people, seeing new places.  Louisiana is also quirky, sometimes annoying, and definitely bat-shit-crazy.  But it also looks, in a lot of ways, just like home. And I go about my day-to-day much like I would at home.  Recognizing, processing, and analyzing the aforementioned quirky/annoying/bat-shit-crazy stuff can fall by the wayside.
However, I've been following more blogs than I used to, both those by friends and total strangers, and reading those blogs has reminded me that writing in a non-academic way can be really fun.  My friend Crystel recently mentioned how it's a different kind of creative outlet that really gives her a break from her job in non-profit.  And reading Elvynia's blog makes me nostalgic both for our time as tea-chairs and traveling.

There are definitely things I can share about Lake Charles and my day-to-day experiences.  I could talk about the people who want to tell me everything about their lives while I'm standing in line at the store, or I could write about all the fascinating books I flagged for "weeding" in the reference section of the library.  I can complain about the humidity, rather than the cold.  Or recount the absolutely absurd moment I experienced in the American McDonald's.  Or I could share this bizarre image, which I found in a Google Image search for Lake Charles: 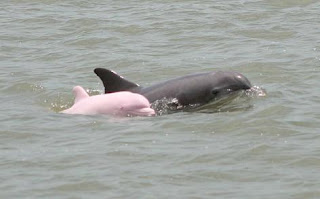 Read about this pink dolphin here.
Posted by al at 12:28 AM 2 comments:

al
I'm Al! I love to travel. Abroad generally means "in or to a foreign country," but it can also mean "in different directions," "over a wide area," and "freely moving about." The last one is my favorite. I've moved a few time in the last seven years, and I will continue to move freely as long as I can.